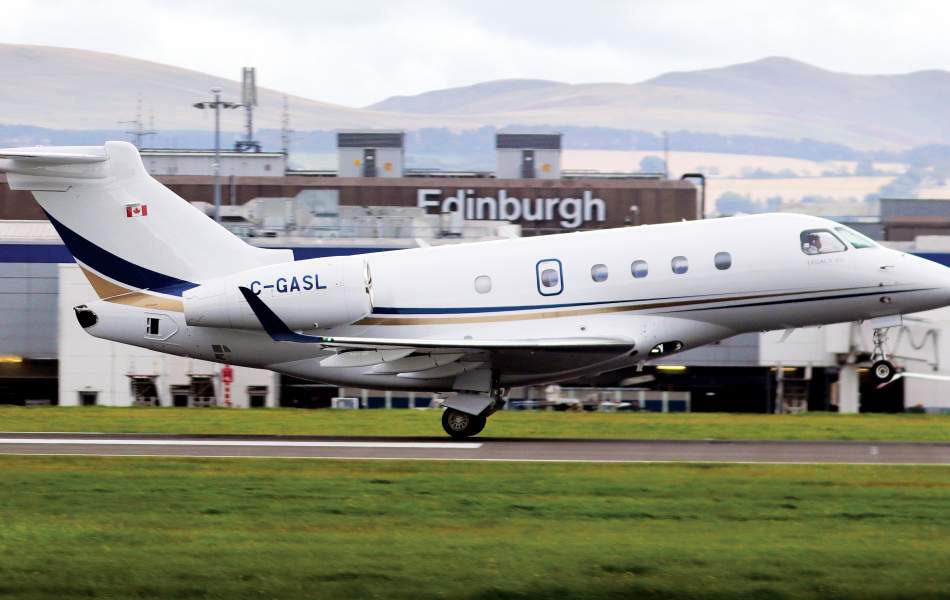 “Why shouldn’t I fly from New York to Paris? I have more than four years of aviation behind me. I’ve barnstormed over half of the 48 states. I’ve flown my mail through the worst of nights.” – Charles Lindbergh

The North Atlantic is notoriously harsh. In the age of sail crossing, the North Atlantic took six precarious weeks at best, and at worst, two to three months. In the age of steam, 18 days was the norm at the beginning of the 1800s, which was slowly reduced to the three-and-a-half day eastbound record in 1952. While not the first to fly across the Atlantic*, Charles Lindbergh’s solo flight of 33.5 hours across the Atlantic in 1927, did usher in the romance of flying the Atlantic. This ingrained into the hearts and minds of the public the idea of lifting oceanic travel into the skies. Soon airships (72 hours), then propeller aircraft (11 hours), and finally jets, plied the Atlantic. AirSprint jets now make this journey with ease from the east coast of Canada to continental Europe in four to five hours. With any journey across an ocean, whether 500 years ago or today, there is a lot going on to make it a success.

Why not join us now for a trip across the Atlantic?

When one of our Owners places a request for a European trip, our Flight Operations springs into action to validate the required route, the enroute diversion airports (in case of an urgent landing), the destination airport, and the destination alternate airports (in case the primary destination is not useable). Additionally, logistical details such as customs, airport approvals, and ground handling are checked for availability and suitability. This is all carefully assessed with great attention given to the anticipated weather, winds, and required fuel.

Once the trip has been validated, the details are provided to the Owner and the trip is booked accordingly. Leading up to the trip, Flight Operations is continually monitoring the weather, the airports, and the best routing. Additionally, Flight Operations is making all the logistical arrangements for the passengers, crew, and the aircraft. This pre-work all comes together on the day of the trip.

The flight plan is filed with Air Traffic Control (ATC), which comprises a domestic (Canadian) portion, an oceanic portion, and another domestic portion (European). While these portions are all filed into one plan, they are distinctly different in how the pilots and air traffic control manages that portion of the flight.

Why is oceanic flight managed differently?

These flights are managed differently because a large portion of the airspace is over the ‘high seas’ or international waters. The airspace over the North Atlantic, referred to in aviation as NAT, is the busiest oceanic airspace in the world. Every day 2,000 to 3,000 aircraft traverse this airspace. The majority of this occurs in a non-radar environment, therefore, it is procedurally managed. This is an amazing accomplishment, because twice-daily there is a massive migration of airliners that is driven by the airline passenger market’s demand to travel in a narrow band of departure and arrival times. In this vast area, ATC is provided by a number of different countries via a cooperative and highly coordinated system. Luckily, the private jetsetter can break free from the herd by picking the time and the airports to match their personal itinerary.

First, pilots conduct a navigation accuracy check. This is done because we will soon enter an area of no radar. In this space, we are amongst many aircraft which means it is vital that we are always where we say we are and at the agreed upon time. Accuracy checks are conducted by tuning in to a ground-based navigation system and comparing it to on-board flight management systems.

Secondly, the altimeters are checked for accuracy. Aircraft are separated both horizontally and vertically and an altimeter shows altitude above sea level. Once that is completed, pilots will switch from Very High Frequency radios (VHF) to High Frequency radios (HF). This is done because VHF radios will not have reception over the ocean. HF radio uses a method known as ‘skip’ or ‘skywave’ propagation for long distance communication. In this method, radio waves bounce off the upper atmosphere back to the ground and back up again. To conduct these tests, pilots will reach out to one of six strategically located aeronautical radio stations along the coast (Gander, Newfoundland; Iceland; New York; Bodo, Norway; Ballygirreen, Co. Clare, Ireland; and Santa Maria, Portugal).

Next, pilots will ask for oceanic clearance. This can be done a number of different ways, but at AirSprint we do it by Controller Pilot Data Link Communications (CPDLC). This system transmits information about the aircraft and text messages back-and-forth between air traffic control and the pilots.

Once pilots are given oceanic clearance, both pilots check all navigation systems for alignment with the clearance. Pilots then set about plotting the route on a paper map. In this high-tech world, this may seem odd but this is done to add one more safety layer. Paper maps allow pilots to get a verification that is completely independent of the aircraft navigation systems. This method is as fundamentally important for safety today as it was 500 years ago for sailors.

Finally, as we approach the boundary where we will transition into oceanic airspace, pilots insure that their flight level and speed in Mach are exactly as issued in the oceanic clearance. Everyone is depending on the accuracy of where our plane is and where we will be. To accomplish this, NAT tracks are published every day. Each day these tracks shift north and south and can change depending on forecasted winds and weather. These tracks are like highways in the sky that funnel and separate the traffic flow.

With everything in order and with Flight Operations back at AirSprint’s Integrated Operations Control Centre (IOCC) monitoring our progress, we step off the coastline of Canada into the Atlantic.

We are in smooth air, flying high above the weather and the airliners on the tracks below. Our passengers settle into their custom ordered meal, prepared by AirSprint’s partnered executive chef and paired by AirSprint’s partnered sommelier. This is the way to travel the Atlantic and enjoy its stunning views. It’s a far cry from the days of Lindbergh.

“I had four sandwiches when I left New York. I only ate one and a half during the whole trip and drank a little water. I don't suppose I had time to eat any more because, you know, it surprised me how short a distance it is to Europe.” – Charles Lindbergh

Meanwhile, our pilots, immersed in one of the most technologically advanced business jets in the world, are judiciously monitoring the progress and ensuring the CPDLC is automatically reporting the aircraft’s position to Gander at every waypoint.

As we approach the middle of the Atlantic, we are transferred from Gander Oceanic to Shanwick Oceanic. Because of this, we do our standard HF radio check again to ensure reception as a back-up to our CPDLC. The pilots are busy: at this speed we will soon be in Europe. Not only are the pilots monitoring and controlling the flight’s progress, they are proactively looking ahead at weather, traffic, airport conditions, and planning for the domestic portion of the flight, and then the arrival, approach and landing at the destination airport.

As your AirSprint flight approaches the European coastline, we start to prepare for what is known as the ‘Coast In.’ As we come back into range of VHF, we do another navigation accuracy check with a ground-based navigation aid and confirm our anticipated domestic routing. Air traffic control will again start using VHF radio. Since there is a vast amount of traffic coming in from the ocean on organized tracks, all aircraft are funnelled into Europe’s domestic airspace via paired waypoints. These are essentially ‘turnstiles’ in the sky where the aircraft are transitioned from the oceanic air traffic controller over to the domestic controller. Since business jets like AirSprint have the luxury of operating at such high altitudes, it is time to start descending. AirSprint has conducted flights not only to the United Kingdom, but also to France, The Netherlands, Portugal, and other mainland European countries. Regardless of which country you have chosen, you will see the descent start over the UK as your flight integrates into the domestic structure. Europe is the world’s busiest airspace, so you will notice your pilots busy on the radios.

From your vantage point in the cabin, it’s time to enjoy the views below as historic Europe rises up to greet you. You will soon be landing at Le Bourget (Paris), France, 93-years after Charles Lindbergh touched down at that very same spot. Your restaurant table under the Eiffel Tower is ready for you.

“About forty miles away from Paris, I began to see the old trench flares they were sending up at Le Bourget. I knew then I had made it, and as I approached the field with all its lights, it was a simple matter to circle once and then pick a spot sufficiently far away from the crowd to land O.K.” – Charles Lindbergh ✈

*In 1919, Alcock & Brown in a Vickers Vimy crossed the Atlantic in 16 hours. Lindbergh was the 19th aviator to cross, but he was the first to do so solo.

Back To Articles
Get Started