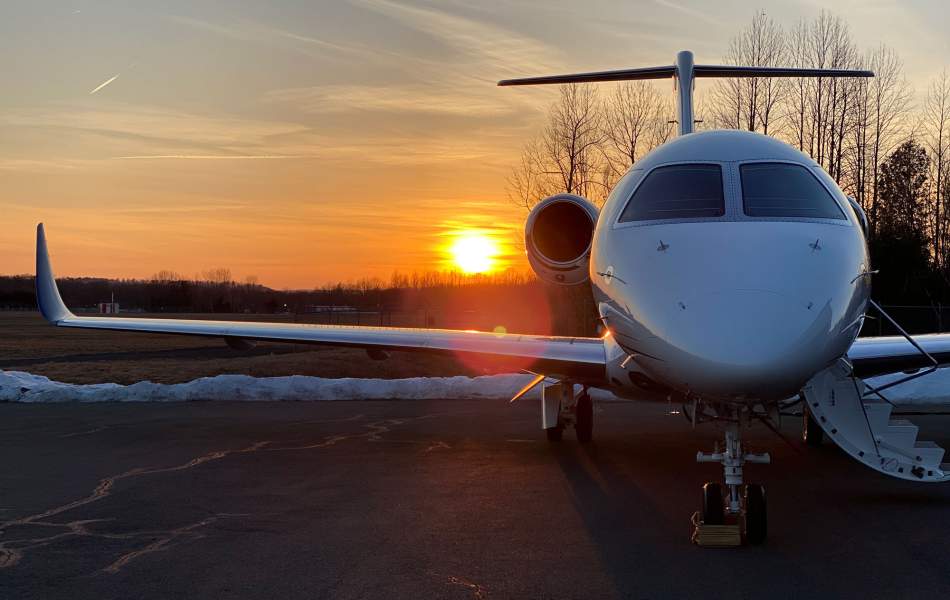 Aviation is an exciting industry. It’s one of those things that gets into your blood – and once it does, it will be there for life.

While everyone's pilot career develops differently, it's also true that hard work and dedication are the foundations of success in the aviation industry.

At AirSprint, we have a dedicated safety-minded group of over 90 full-time pilots on staff—ready to serve our Fractional Owners. Here, three pilots share real-life stories about how their careers took shape. 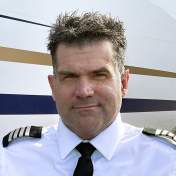 David Brickell went to university for architecture, but his head was always in the clouds.

“I had the pilot thing in the back of my mind, but I didn’t know of any practical way to do it. There are significant costs associated with pilot training and that seemed like a barrier.”

With no family or friends in the aviation industry, David was lucky that his university counselling centre referred him to Seneca College and Sault College, two Ontario post-secondary institutions offering subsidized professional pilot programs.

“I applied to both and transferred to Seneca,” he said. “The nice part about Seneca is all you paid was the tuition cost and the flying was subsidized. It certainly opened up the path for me, because of the financial restrictions.”

During his three-year program, David dropped in repeatedly at a flying school near his parents’ home in Peterborough, Ont.

“I’d just go in and visit,” he recalled. “When I finished school, an opportunity happened to come up. I did all of my instructor rating there and that was basically my interview process. I instructed for about a year and a half. Then, I heard about another job at the airport flying a piston twin-engine Piper Navajo. With aviation, you need some luck to be in the right place at the right time.”

After the Navajo, David went north to Wasaya Airways in Thunder Bay. Once again, his luck held as a friend told him about an opening, a captain’s position on a Pilatus PC-12 single-engine turboprop. He spent a year flying for Wasaya, providing service to isolated northern communities.

Around that time, AirSprint was launching its fractional aircraft ownership program in 2000. The company opened a base at the Region of Waterloo International Airport, much closer to home for David.

David didn’t know much about business aviation at the time, and he didn’t have a set career path in mind.

“This job really interested me because of the right aircraft and location,” he said. “When I flew the Navajo, I had experience flying the owner around. I realized I preferred that to the northern Ontario airline-type flying. I preferred the connection with the client.”

Nineteen years later, he’s still at AirSprint, enjoying the more personal connections afforded by business aviation. “There are a few things in business aviation you won’t get anywhere else. You get to know the people and then there’s also a variety to the flying that can’t be matched.”

David has flown into 450 different airports during his AirSprint career, including mountainous Telluride Regional Airport in Colorado, at an elevation of more than 9,000 feet.

As far as his salary and schedule, both have improved over time.

“The money and time off does improve as you go through. At the beginning, for the first few years, you’ll work a lot and not make a whole lot,” said David. “But it’s worth it. You need to have a bit of a passion for flying and recognize the joy you get from being in the air and flying. This is kind of amazing what we’re doing right now! It makes the sacrifices worth it.”

AirSprint offers a more structured bidding process and with multiple owners for each aircraft, he said his livelihood is not tied to one owner’s fortunes, as it is with some business aviation jobs.

“Job security is remarkable at AirSprint. I’ve been through the slowdown of the late 2000s, and now COVID. Job security is not on my mind, and that is exclusive to this company.” 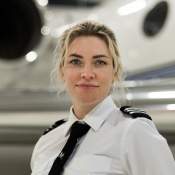 Karen Smiley didn’t do a lot of travelling when she was a kid, but seeing the world has always been on her “someday” list. She thought about being a flight attendant, but then realized it would be exciting to sit up front as the pilot.

“I knew this for a long time, but it was really difficult because it seemed unattainable financially,” she recalled. “No one in my family was in aviation.”

In her early 20s, she worked hard at building a sales career that allowed her to save up enough money to consider pilot training. However, she realized she had more research to do.

“I started working in aircraft fuelling and began to talk to pilots about how they did it, how they got the money for training. Then, I went to one of the schools. I kept going out there and I spoke to an instructor. He said there were some grants available, and I applied and got some of them. That helped out.”

Finally, she signed up for helicopter pilot training in Springbank, Alta. When she finished her licences in 2008, the job market was soft and it seemed that any opportunities she heard of were for fixed-wing pilots.

“I ended up working at the Esso at Springbank; then I decided to go back to school for my aircraft maintenance engineer (AME) licence and then started working as an AME.”

Not content to stay still, she next pursued her fixed-wing conversion and, while doing so, heard about a corporate pilot job flying a Cessna 340 piston twin.

“That job came from all the years of meeting people and networking,” said Karen. “I was there for about three years, doing a lot of the trips that I do nowadays.”

She knew of AirSprint and “kept popping in there to stay in touch.”

When an opening came up, they asked her if she’d be interested in a Toronto-based position. She moved east immediately.

Karen was hired as a first officer on the Cessna Citation CJ2+. After a year and a half, she moved to the Citation CJ3+, and then to the right seat of the Embraer Legacy 450, where she’s been for the remainder of her four years with AirSprint.

“I like corporate flying. You’re going everywhere and you aren’t on a schedule. AirSprint is a fractional company, so there is a lot more flying to different destinations, which is appealing. The aircraft are smaller, so you can have a rapport with the passengers. And, we go to really cool places like Barbados and Bermuda.”

Currently, Karen gets 10 guaranteed days off every month. There are some scheduled flying days and other times when she is on reserve, and must be prepared to get to the airport within 90 minutes of a call. It’s necessary to plan ahead on those days – “the bag is pre-packed and ready to go.”

She often works holidays, actually preferring to do so since she doesn’t have kids and those shifts pay more. For the first year or two, however, she said most people should be prepared to work holidays.

Karen’s path to the cockpit was different from many, in that she started as a helicopter pilot and then became an AME. But she has no regrets.

“I think all knowledge counts,” she said. “I don’t think anything was wasted. I use all of it in little ways.”

She had some additional advice for those who are preparing for their first pilot interview. “If you know a pilot, ask them for interview pointers, and prep your questions using online sources. It’s about the little things, too, and how you stand out. People can forget you easily. Once, I bought cupcakes and put a little plane on them, and sent them to the company with a thank you card. I got the job.” 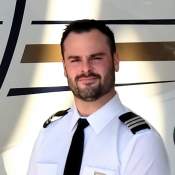 Eric Dagg finished his private pilot licence part-time while he was enrolled in university. He’d always been interested in flying, and began to think seriously of making a career out of it. After university, he took the advice of a family friend and retired airline pilot who recommended that he enroll in the two-year professional pilot program at Selkirk College in Castlegar, B.C. The program – since cancelled – required students to have their private pilot’s licence.

“It was an experience, an adventure, to move out west and fly in the mountains,” said Eric, who grew up in Waterloo, Ont.

At the time, Selkirk College had a partnership with AirSprint. The operator would take one student from each year’s graduating class and give them a job working in the hangar and on the ramp. When he finished the program in May 2014, Eric was chosen.

“It’s common knowledge all over this industry that the starting job is to work in the hangar or the ramp,” he reflected. “Companies are looking for people who do whatever they can to get the job done. I worked in the hangar in Calgary for 13 months – that year was basically my job interview. I think the willingness to work and the willingness to do well and not be lazy got me a chance to fly.”

Between working the ramp and joining AirSprint as a pilot, Eric flew briefly for a regional airline, but quickly found it wasn’t for him. He likes the day-to-day excitement of going to different destinations.

“In business aviation, we’re constantly going to new places, always doing something new. I’ve flown into more than 200 airports while working for AirSprint. I have an affinity for mountain airports, so I like flying into B.C. and Colorado.”

Another aspect of the job that he likes is the opportunity to solve problems and think on the fly. “We deal with catering and ground transportation issues, rental cars for our passengers, etc. You have to be able to think without guidance; make decisions and communicate them, solve problems without asking the boss.”

As a parent of young children, Eric also appreciates a schedule with guaranteed days off. Pilots at AirSprint work in 28-day blocks. In his case, he is either flying or on call for 16 days – pre-pandemic, he would generally be away from home for about 14 of those 16 days.

“It’s definitely challenging when you have young kids,” he said. “We’re lucky to live in a time where technology let us stay in touch easily. I can’t imagine doing the same thing 30 or 40 years ago. Of course, a strong partner helps a lot, to hold the fort down while you’re away.”

As for getting his career off the ground, Eric knows he was lucky to have a family friend in the industry. For those who don’t have a contact, he recommends social media groups or just hanging around the flying club, where there is “always someone willing to help you out.”