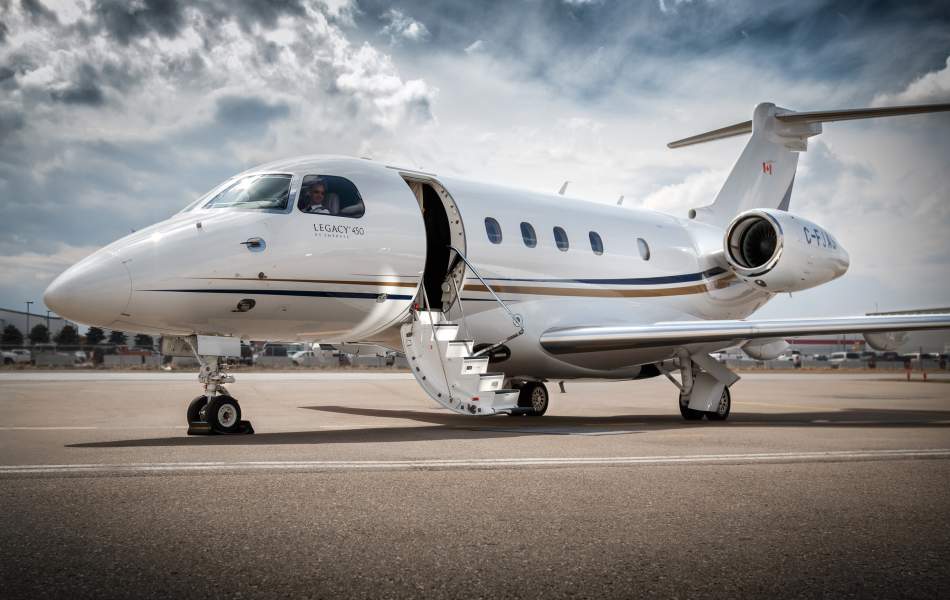 “The revolutionary Legacy 450 delivers the ultimate customer experience with a best-in-class cabin altitude in a six-foot flat-floor cabin with ample space and amenities, including high-speed connectivity and a generous baggage compartment,” said Michael Amalfitano, President & CEO, Embraer Executive Jets. “We are elated that the Legacy 450 continues to fascinate AirSprint customers and deliver true value to their business.”

The purchase agreement for up to 12 Legacy 450 was signed in July 2016. This agreement has an estimated value of USD 198 million at the current list price, if all options are exercised.

“New airplane days are always exciting times at AirSprint,” said James Elian, President & COO of AirSprint Inc. “We just added our 6th Embraer Legacy 450, C-GASE, to the fleet. Since December 2016, we have flown the Legacy 450 for over 7,700 hours on 5,300 flights. The combination of comfort and performance has made the Legacy 450 very popular with our fractional Owners and we look forward to adding more aircraft in the future.”

In December 2016, Embraer and AirSprint flew the Legacy 450 on its maiden voyage to Hawaii, from California, establishing two speed records on the round trip. The National Aeronautic Association (NAA) and the Federation Aeronautique Internationale have confirmed each of these flights as a U.S. record and a world record, respectively.

AirSprint is a privately held company based in Calgary, AB and maintains the largest fractional fleet of private aircraft in Canada, including the Embraer Legacy 450, serving Canadians from coast-to-coast including, Vancouver, Calgary, Edmonton, Winnipeg, Toronto, Ottawa, Montreal and the Maritimes.

AirSprint provides successful Canadians with a better choice for optimizing their time by enhancing the private jet ownership experience with industry leading safety standards, exceptional turn-key service, and increased flexibility, all at a fraction of the cost, and personalized for their individual travel needs.

The Legacy 450 is a medium cabin business jet with a best-in-class 6-foot-tall flat-floor cabin. Four fully reclining club seats may be berthed into two beds for complete rest in a 5,800-foot cabin altitude, the lowest in its class. The optional in-flight entertainment system consists of a high-definition video system, surround sound, and multiple audio and video input options. Voice and data communications options are also available. The cabin includes a refreshment center at the entrance, a rear private lavatory with a vacuum toilet and an in-flight-accessible baggage area. The total baggage space is the largest in the aircraft’s category.

The Legacy 450 is powered by two advanced, fuel-efficient Honeywell HTF 7500E turbofan engines, the greenest in their class. With four passengers and NBAA IFR Reserves, the Legacy 450 is capable of flying 2,900 nm (5,371 km), which enables non-stop flights from San Francisco to Honolulu, São Paulo to Bogotá, Moscow to Mumbai, New Delhi to Singapore, Singapore to Beijing, Beijing to Kuala Lumpur, or Hong Kong to Alice Springs.

Embraer is one of the world’s leading executive jet manufacturers, having entered the business aviation market in 2000 with the Legacy jet, which led to the launch of Embraer Executive Jets in 2005. Its portfolio, the broadest in the market, consists of the entry-level Phenom 100EV and the light Phenom 300E jet, the medium cabin Legacy 450 and Legacy 500, the large Legacy 650E, and the ultra-large Lineage 1000E. Embraer Executive Jets’ global fleet exceeds 1,200 aircraft, which are in operation in more than 70 countries and are supported by the Company’s global Customer Support and Services network of over 70 owned and authorized service centers, complemented by a 24/7 Contact Center, at its headquarters, in Brazil. For more information, please visit www.EmbraerExecutiveJets.com

Embraer is a global company headquartered in Brazil with businesses in commercial and executive aviation, defense & security. The company designs, develops, manufactures and markets aircraft and systems, providing customer support and services.

Since it was founded in 1969, Embraer has delivered more than 8,000 aircraft. About every 10 seconds an aircraft manufactured by Embraer takes off somewhere in the world, transporting over 145 million passengers a year.

Embraer is the leading manufacturer of commercial jets up to 150 seats. The company maintains industrial units, offices, service and parts distribution centers, among other activities, across the Americas, Africa, Asia and Europe. www.Embraer.com